When high school junior Natalie - or Dr. Aphrodite, as she calls herself when writing the relationship column for her school paper - is accused of knowing nothing about guys and giving girls bad relationship advice, she decides to investigate what guys really think and want. But the guys in her class won't give her straight or serious answers. The only solution? Disguising herself as a guy and spending a week at Underwood Academy, the private all-boy boarding school in town. There she learns a lot about guys and girls in ways she never expected - especially when she falls for her dreamy roommate, Emilio. How can she show him she likes him without blowing her cover?
~Haunted Rose's Review~

O.K. First off this cover is one of the most eye catching I have ever seen. I know this is judging a book by its cover but I can't help but think this book is going to be great. I took one look at this book and was like this just screams teenager. It's the perfect example of a book anyone would like to read. I know there are people out there who are a little tired of the paranormal well this book is a comical, romance, adventure book with no vampires what so ever. :) I laughed through out the whole book and the librarian shushed me several times. I love how brave and out there Natalie is. She isn't afraid to do the impossible or put herself in a situation most girls would laugh at. She is uplifting, halarious, and down right sexy. Even if she cuts her hair off like a boys and uses imaginary stubble, she is still quite attractive. I have to say I am very sorry for poor Emilio stuck with her. I think she might be alittle too adventurous for that hombre. Not only is this a funny realistic read it also gives you a life lesson that you will just have to figure out yourself.

I give it 5 out of 5 Haunted Roses

Posted by Shelby Young at 3:09 PM 2 comments: Links to this post

Waiting On Wednesday I 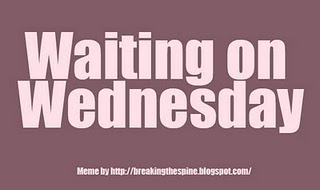 Waiting On Wednesdays… is a weekly meme where I post about the latest books I am waiting to get or be released. Hosted By- Breaking The Spine.
This week I have won a few books and I am anxiously awaiting them in the mail. Here are 3 that are on the way.

Daimon (Covenant 0.5)
By- Jennifer L Armentrout
For three years, Alexandria has lived among mortals—pretending to be like them and trying to forget the duty she'd been trained to fulfill as a child of a mortal and a demigod. At seventeen, she's pretty much accepted that she's a freak by mortal standards... and that she'll never be prepared for that duty.
According to her mother, that’s a good thing.
But as every descendant of the gods knows, Fate has a way of rearing her ugly head. A horrifying attack forces Alex to flee Miami and try to find her way back to the very place her mother had warned her she should never return—the Covenant. Every step that brings her closer to safety is one more step toward death… because she's being hunted by the very creatures she'd once trained to kill.
The daimons have found her.

Half-Blood (Covenant 1)
By- Jennifer L Armentrout
The Hematoi descend from the unions of gods and mortals, and the children of two Hematoi-pure-bloods-have godlike powers. Children of Hematoi and mortals-well, not so much. Half-bloods only have two options: become trained Sentinels who hunt and kill daimons or become servants in the homes of the pures.Seventeen-year-old Alexandria would rather risk her life fighting than waste it scrubbing toilets, but she may end up slumming it anyway. There are several rules that students at the Covenant must follow. Alex has problems with them all, but especially rule #1:Relationships between pures and halfs are forbidden.Unfortunately, she's crushing hard on the totally hot pure-blood Aiden. But falling for Aiden isn't her biggest problem--staying alive long enough to graduate the Covenant and become a Sentinel is. If she fails in her duty, she faces a future worse than death or slavery: being turned into a daimon, and being hunted by Aiden. And that would kind of suck.

Savor (Warm Delicacy 1)
By- Megan Duncan
When Claire Miller turned eighteen all she wanted to do was celebrate her birthday, but after a night on the town with her best friend she awakes to a visitor she never expected. The rulers of her region, a vampire royal family, have chosen her to be turned as their new heir and vampire princess. Claire quickly discovers the royal family is not what they seem and that she has secrets in her past, she never knew existed.
Posted by Shelby Young at 2:44 PM No comments: Links to this post