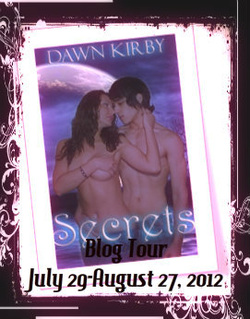 Good day bookworms! Welcome to my second post on the Secrets Tour! Today is the awesome music guestpost by Dawn Kirby and yesterday was the review! Don't forget to comment what you think! 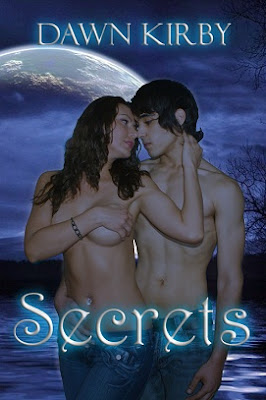 It is said that the truth will set you free, but for Leah it kills.
Leah always knew she was different. From her extreme light sensitivity, to her ability to read people by their auric scent, she kept these differences secret.
Not even Mia, Leah's mother, knew the fullness of her daughter's differences, but she held even greater secrets to Leah's past - the truth about her father and Leah's conception.
With the escape of an old foe, Mia is too late to reveal to her daughter
the truth before Judith can exact her revenge in a wash of blood and death.
Thrown into a world unheard of, Leah discovers that she is not alone in keeping her secrets. That there are people from her parent's past who would die to protect her. If she only knew why.
Raine, placed as her protector, hides deadly secrets of his own. Drawn to each other, Leah and Raine must uncover the truth before one of both are killed.

Music as a Muse

Author Dawn Kirby describes how music played a big part behind the characters in her debut novels, Secrets.

Inspiration derives from many sources. Pictures, scenery, weather, a certain someone. For me, none is more powerful than music. It literally feeds my soul when I write.  The right song can drive an entire scene. Sometimes it can even aid in the creation of a new character. And sometimes a song or simple melody can breed a whole new story altogether.

When I wrote SECRETS I had several songs on my playlist I could count on at any given time to help with one character or another. Anytime I needed a little help wrapping my head around Kale’s “I’m all that” attitude, I could turn on One Republic’s EVERYBODY LOVES ME and dive right into his head without fail. For Donovan; his attitude is always a bit more regal than most of my other characters. That’s where Phantom of the Opera came in handy. I could turn on almost any song on the soundtrack and let it carry me right into him.

As for driving scenes, the most memorable one from SECRETS was when Raine came back for Leah. Only one song drove me; Nickleback’s I’D COME FOR YOU. It said everything I wanted conveyed between the two and more. Their connection to one another is so strong no force in Heaven or Earth could tear them apart. They refuse to make the same mistakes others have made regardless of what they have to endure to be together. LIKE YOU by Evanescence was another song I used. I won’t spoil the reasoning behind it, but I will say it fit David and the situation he found himself in to a T. He’d sacrificed so much throughout the years, its no wonder. Apathy, no matter how much or little of it there is can be our biggest enemy. So far I’ve had only one song bring a whole new story to mind. A very dear friend posted UNINVITED by Alanis Morissette on my Facebook wall not too long ago. Almost immediately after hearing the first verse, I had an entire story mapped out in my head. The music is haunting, the lyrics un-giving, almost daring the listener to fall for the one thing they can’t have. What a fascinating paranormal tale that will make.

I love it when friends and/or fans send me songs they think I’ll like. Most times they have my tastes nailed and I add it immediately to my playlist. Other times, it may take some searching, but I can usually find a use for it within any number of stories I’m developing in one way or another.

Music is never wasted.
There will always be room for it in my life as well as the stories I write. 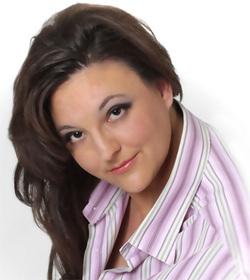 About the Author: By day, Dawn is a typical mom running around after her children, catering to her husband’s needs, acting as a taxi driver, and gourmet chef living in Odessa, Texas, with her husband, and three children. Then by night she falls into a world filled with shirtless werewolves, lethal vampires, and dangerous adventures. Her short stories have been published inSeven Deadly Sins (http://www.goodreads.com/book/show/13517087-seven-deadly-sins) and 13 Tales of Paranormal(http://www.goodreads.com/book/show/12852482-13-tales-of-the-paranormal)

Posted by Shelby Young at 1:20 PM No comments: