The New Death and Others By James Hutchings Review, Interview, and Giveaway

Death gets a roommate...

44 stories. 19 poems. No sparkly vampires. There's a thin line between genius and insanity, and James Hutchings has just crossed it - but from which direction?

~Haunted Rose's Review~
The New Death and Others is a collection of some entertaining short stories and poems. I could tell I was reading something that took alot of thought and talent because I laughed out loud several times to the point where my librarian told me to shut up. I would like to tell you my viewers about the most ironic funny ones.
The End-
This one had me laughing becuase what are the odds of 2 vampires, a succumbus, a demon, and a regenerate coagulate rage of murdered children on a camping trip together? They all come to the conclusion of what if all the humans are wiped out? And I thought to myself It's probably true seeing as how I'm a demon too.
How the Isle of Cats Got It's Name-
This is one of my favorites mainly because I love cats and I love how the sly and smug Artemisia is. I was sad towards the end becuase of the Kitty Killer Harp (read to find out), but the smug Artemisia won at the end at the wizard Abi-simti's demise.
The Doom That Was Laid Upon Fame-
I absolutely love how he uses gods and goddesses names and characteristics to make a story in this one. My favorite part was "You know how Pestilence and War and Fame and I are the 4 riders of the Apocalypse. Well he's the fifth.  His name is Lawyers."
Everlasting Fire-
This one was the funniest and most ironic. A ironic punisher is punished because of her own lust even though she scourges the lustful.
Rumpelstiltskin-
A gnome who has the power to spin bullshit into gold becomes a consultant. The moral of the story ends up being if you can't do anything else, get into politics.
Now if you still don't think this story is worth the read then here is a little teaser poem.
If My Life Was Filmed 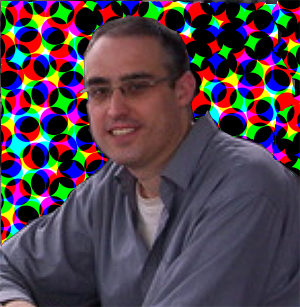 If my life was filmed, it would
go straight to DVD
and someone who was famous once
would have the role of me
and if five stars meant 'excellent'
you'd give it two or three
and most of those who rented it
would watch ironically.
Years later they would track me down
and do an interview.
They'd say "I heard you died," and I'd
say "Yeah, I heard that too."
"Is any of it fictional?"
"Perhaps a scene or two.
There weren't as many ninjas, but
the rest is mostly true."
Now For The Interview with the author himself!
James Hutchings!
TELL US ABOUT YOURSELF.
I fight crime as Poetic Justice, but my day job is acting. You might know me by my stage-name 'Brad Pitt.'

IN ONE SENTENCE ONLY, WHY SHOULD WE READ YOUR BOOK?
It has a computerized pope.

ARE YOU WORKING ON ANY OTHER BOOKS?
I'm working on a verse version of 'A Princess of Mars'. This is a science fiction adventure story, now in the public domain, written by Edgar Rice Burroughs, who's more famous for Tarzan. Disney is also doing a movie of it, called 'John Carter', but that's not why I chose it. I generally work on several things at the same time, so I'm also in the middle of a few short stories and poems. I've been encouraged to write a novel set in the fantasy city of Telelee, which is the setting of a few of the stories in 'The New Death and others'. I have a lot of background for this world, because I blog every day (http://www.apolitical.info/teleleli) and most of it is setting detail. I also have a half-finished novel called 'All-American Detectives', which is a combination of a detective story and a story about superheroes, which I'll probably come back to in the future.

*You can find his works on Smashwords*

WHAT AUTHORS INFLUENCED YOU THE MOST?
JRR Tolkien and Jack Vance for the elaborate dialogue. Robert E Howard for the general atmosphere. Terry Pratchett for the humour. Lord Dunsany for the use of Fame, Time and so on as characters.

ZOMBIES, VAMPIRES, WEREWOLVES, ANGELS, DEMONS, WITCHES, OR FAERIES AND WHY?
I actually have very little of any of them in my stories. I'm quite out of touch with contemporary fantasy. For example I've never read any of the Harry Potter, Twilight, Wheel of Time or Game of Thrones series.

WHAT IS YOUR FAVORITE STORY IN YOUR BOOK?
Probably 'The God of the Poor'.

WHAT IS THE WILDEST MOST IRONIC IDEA YOU HAD IN YOUR BOOK?
"Hey, I could probably make a living from writing."

WHAT IS YOUR FAVORITE BOOK?
I read a lot more short stories than novels at the moment, so I probably have favourite stories rather than a favourite book. But perhaps The Hobbit.

IF HARRY POTTER AND EDWARD CULLEN HAD A FIGHT WHAT DO YOU THINK WOULD BE THE OUTCOME?
A lot of slash fiction where Legolas came along and joined in.
Now for the Giveaway!
Rules-
Thanks!
Posted by Shelby Young at 9:11 AM 1 comment: