Carrier Of The Mark By Leigh Fallon Book Review 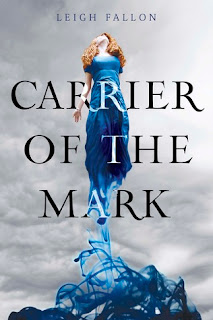 From the moment she sets foot at her new school in Ireland, Megan is inexplicably drawn to the darkly handsome Adam DeRis. But Megan soon discovers that her feelings for Adam are tied to a supernatural fate that was sealed long ago—and that the passion and power that unites them could be their ultimate destruction.
This electrifying debut novel was first discovered on inkpop.com. the online community for aspiring writers. THE CARRIER OF THE MARK sizzles with unbridled romance, a unique supernatural hook, and a breathtaking Irish setting, and will entice fans of the Need series by Carrie Jones and the House of Night series by P. C. and Kristin Cast.

~Haunted Rose's Review~
I got Carrier of the Mark in a giveaway and I have been itching to read it a long time! I started reading it right off the bat. It was a whole new perspective involving the 4 elements fire, water, earth and air. There was a few tines where I felt like the book was going too fast and was a little unrealistic in the romance department. I was hoping the love between Megan and Adam would have more problems and not all I love you and we will be together forever. The only major problem I saw was when Megan realized her love for Adam could bring the fifth element, the most dangerous uncontrollable one of them all. Not only does Leigh Fallon give you a romance but she also incorporates the feelings of a normal teen moving to a new place once again and having to make new friends. I was really surprised how the beginning even started off with no paranormal what so ever but slowly some evidence leads up to the magic. So if you like romance paranormal and a quick read I suggest Carrier of the Mark.

I give it 3 out 5 Haunted Roses

Posted by Shelby Young at 11:27 AM No comments: